Lingering in the Woods 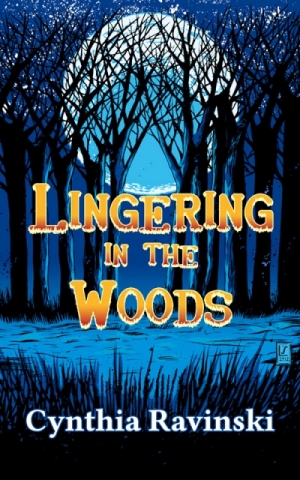 Lingering in the Woods is the first installment of a serial epic fantasy collection, A Shaman’s Rune. A sequel will be coming out later in 2015.

An untested shaman. A demanding chieftain. If Chrigle can’t protect his tribal hunting party and their bounty, exile is certain.

When his Spirit Guide cries a fierce warning, he halts their homeward ride. The hunters are not alone. Chrigle must wield his runes to protect the hunters for dark magic fills the wood and a vengeful spirit is desperate to find its next victim.

The night fills with uncertainty and fear as his struggle to win a place in his tribe becomes a test of will and sacrifice. If he survives the price of success may be too high.

Praise for Lingering in the Woods:

*If you are a book reviewer and are interested in reviewing this title, contact me for a free copy in exchange for a fair review.

“In a world of dark, Finnish-inflected magic, Ravinski conjures up a story of persistent evil and of grim duties. Some of those duties are evaded while others are bravely met, but either way, the consequences endure. And the story, too, has a way of staying with you after you’ve finished it.”

“I found this story to be a great one. Filled with action and surprises it’s the perfect book to spend an evening with. It also had a moral to the story if you will. Be strong and face your fears. I think the writer captured the scene in perfect detail and made me want to keep turning pages to the end. I believe you will be as excited by this one as I am and be waiting for more books like this from the author.

I gave this one 5 out of 5 books because the detail placed you in the story so easily.

–Have you Heard My Book Review

“I easily finished this story in a few hours. I was hooked on every word while reading and did not want to put the book down.”

“I found Ms. Ravinski’s writing imaginative. Within a short story type format she managed to set a sense of history, create a character the reader could root for (Shaman) and leave you hoping for more to come, a sequel or series perhaps.”

“… once I started reading it (on my Kindle) I could not stop. This is such a perfect story, in its length and its depth, I just have to praise it. Cynthia does a beautiful work of providing background knowledge as it is pertinent to the story and thus having not a single lull in the narrative. The pace is enthralling, the characters defined and the theme profound.

I sincerely hope there is another instalment to this story, as I would follow a series enthusiastically.”

“In many books you can tell that the writer had to submit a certain number of words to editor requirements so they filled the story with useless fluff. This would be the complete opposite. The prose is very tight and every word and thought fulfills a vital need. The story involves the usual heroic archetypes but within the short space of 31 pages Cynthia manages to have them display multiple aspects. For example one ‘evil’ character also manifests significant sympathy from the reader.
I really, really hope she continues this setting and plot line !

If you’re still reading this then you should just buy her book now !”

I suggest this tale for anyone looking for a quick read with a robust magical setting. I look forward to reading more of her work.”

–Matt & Jenny B on Amazon

“Already impressed with the first emotostory I read, Grit City, Lingering in the Woods was no different. The strength of the writing was consistent, edgy, even if this was a more magical, fantasy tale. The greatness of this tale was in the depictions of magic actually. The spells or rituals were complex, detailed in steps and tools used. The mythology was sound, and while different easy to follow, riding a nice balance with the suspense built of the unknown elements. I know personally how hard that is to achieve.

There were complicated relationships set up in this tale, ones that tugged on your heart, as well as incited other emotions. The plot was unique and engaging, the fantasy characters believable, the writing superb, the descriptions and illustrations wonderful. As an author with many pubs, I am very impressed with the caliber of authors Grit City has published. Seriously, that is one of the best compliments I can give.”

“Y’know, this isn’t normally my cup of tea, but I dug this story.

Lingering in the Woods is a well crafted little piece of genre fiction that leaves the reader wanting more. The story’s rich surroundings hint alluringly at some larger, fantastical world, as though the tale of Usko and the shaman is merely a footnote in something bigger. Said world (created by Cynthia Ravinski) is a bleak, snowy Taiga, but it feels epic and open-ended.

Admittedly I’m sort of gushing, but I don’t get to enjoy fantasy often so bear with me. It’s not every day that you find an author who can charge a story that takes place in a world based on medieval Scandinavia with urgent immediacy. Ravinski’s ability to strip mine the best elements of a genre while leaving the clunkier components lying behind her in the snow is almost (dare I say) Quentin-esque.

The semi-abstract illustrations, elements of the “emotobook” formula utilized by this and other Grit City titles, help to flesh out this bleak, nordic low fantasy piece. Highly recommended for entry-level fans of the genre and curious, open-minded folk like myself. I can’t think of anything mean to say, so to hell with it. 5 stars.”

“Cynthia Ravinski has an amazing ability to capture atmosphere and bring you into the world of Northern Europe. Despite its fantastical setting, she is able to show you a world that is both fanciful yet familiar.

Lingering in the Woods follows a young Shaman who comes across a restless and fallen soul and is forced to do battle against a demon at great costs. The story addresses themes of making difficult choices at the expense of helping others, that every life is precious.

I really felt connected with the young Shaman and his journey to prove himself as both a shaman and as a human being.”