Korinna’s life gets turned upside down when the ghost of her father suddenly appears. Her father was duke of Kyratia City and he wanted Korinna to marry his warlord, the foreign mercenary Galenos, and inherit his title–but the city’s Council has other plans. When the Council denies Korinna’s right to rule, she decides to join Galenos’s mercenary company and tame a wild marewing in order to take the city by force. But people whisper that the late duke’s untimely death was murder, an induced madness that forced him to dance himself to death–and now that madness is spreading. Can Korinna become a marewing rider and conquer Kyratia in time to save everyone? 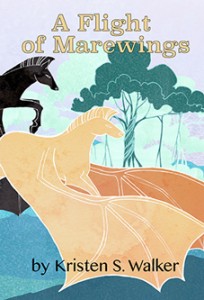 A Flight of Marewings is availible from Smashwords, Amazon, iBooks and Barnes & Noble. You can also find it on Goodreads.

My newest epic fantasy novel focuses on monsters called marewings, which are part horse, part dragon, part demon—all warped together by magic. Cynthia invited me to talk more about what is a marewing and the role they play in my fantasy world.

The Mystery of the Marewing
In my fantasy world, not everything is known about marewings, because they tend to avoid people and they’re hard to study. Ever since their first appearance several centuries ago, they’ve been the subject of speculation and legend. Some people believe that they are a gift from Kylara, the goddess of war, while others think that they’re demons sent to punish humanity. But since no one knows for sure, the wild rumors can fly. Strangest of all, no one knows how they breed, because like their name implies, only female marewings have been observed; nor has anyone seen a pregnant or infant marewing. Where they come from is a total mystery.

A few things are known for sure. Unlike some other monsters that attack humans or attempt to infiltrate human habitation, marewings are reclusive, and their flight allows them to avoid people by keeping to the mountains and other remote areas. They resemble horses in many ways, including diet. Their wings are very large and leathery, but even so, these aren’t enough to keep the large animals airborne. They seem to get their lift from the magical cloudfruit.

Cloudfruit trees grow in marshes and swamps for most of the year. When the fruits start to grow, they’re encased in a hard pod or case that keeps them submersed in fluid. But when they ripen, by the light of the last full moon before the Longest Night, these pods crack. The air activates the magic of the cloudfruits so they literally float up into the air—pulling the rest of the tree along with them! Marewings gather and eat the fruit, which gives them power to fly for another year.

The Bond Between Marewing and Rider
When marewing herds come to the cloudfruit groves once a year, this is the only chance for a human to catch a marewing. Would-be riders must climb the floating trees, harvest fruits, and try to lure a marewing closer. If they’re successful, the rider and marewing form a mystical bond that can last a lifetime.

While marewings won’t let most people come near them, their rider is their closest companion. Riders still have to train and learn how to work with their mount in order to fly together successfully, but somehow, they seem to have a connection that allows them to communicate more effectively than most human/animal pairings. This bond only happens once for a marewing, and they will never accept another rider in their lifetime—and since marewings can remain active for more than thirty years, that’s quite a commitment!

Use in Military Strategy
Marewings are one of the few types of monsters that can be trained to work with humans, and they’re effective for one thing: fighting. Since there are no true horses, and the native donkeys do not cooperate in combat situations, most combat takes place on foot. But marewings give a great advantage to soldiers by allowing them to fly over fortification walls and mountains to attack their enemies directly. Because of their advantage, the number and skill of marewings in a mercenary company can determine their likelihood of winning a battle.

Marewing riders mostly fight from a distance, using bows. Crossbows have less range and can be awkward to load while riding, so most riders prefer to use a recurve bow for maximum range and power. But up close and personal, the marewing herself is a deadly combatant, with sharp teeth, cloven hooves, and a fierce protectiveness for her rider.

Conclusion
Marewings are monsters and we don’t know everything about them. Riders have gained some understanding and use that in military strategy. There may be more to learn in the future, especially if mage-scholars can come to an agreement with marewing riders like Korinna and Galenos to study them more closely. Read A Flight of Marewings and keep an eye out for future installments in the Wyld Magic series if you want to learn more!

Fantasy author Kristen S. Walker dreams of being a princess with a flying horse, but she settles for writing stories for teens and adults. Her new epic fantasy novel, A Flight of Marewings, tells the adventure of a duke’s illegitimate daughter who must stop her father’s murderers–by taming a dangerous monster. A Flight of Marewings is now available in print from Amazon and digitally from Amazon, Barnes & Noble, Smashwords and other ebook retailers. To read a sample chapter or check out Kristen’s world-building references, please visit kristenwalker.net. You can talk Sherlock, horses, and crochet with Kristen any time on Twitter or Facebook.

3: Get the code for Smashwords

5: Get Lingering in the Woods