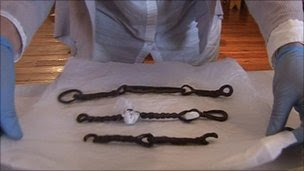 Historical Importance:
Five years of hard work by archeologists and geophysicists, and a year’s time to study (and secure funding), has proven a legend lay under a barley field in Northern Ireland. Linn Duchaill was a Viking settlement, a base where they repaired ships and hunkered down between raids, almost the oldest in Ireland and has been lost to history until now. Ned Kelly, keeper of Irish Antiquities at a local museum says,

“There’s been a bit of a mystery about where exactly the site was located or what exactly the site consisted of, and antiquarians and historians and archaeologists have been trying to sort that mystery since about 1750.”

Things like this always make me wonder how exactly landmarks and cities are completely forgotten. All the people just left, and no one saw it again until, thousands of years later someone digs up something “old” and history is made, again.

According to Irish history, no longer legend, from Linn Duchaill the Vikings plundered the christian monastaries in County Louth, traveled 60 miles north to Armagh, and 100 miles west into Longford on multiple raids during their occupation of Linn Duchaill.

This is a fortunate find as few Viking bases have been excavated, and this will only tell us more about its inhabitants in time to come.