Discovery:
Norse legends (let’s face it, there aren’t many stories out of Scandinavia that aren’t legends-but that’s another post) tell of mariners holding up stones to the sky, sólarsteinn, to discern the direction of the sun on a cloudy day. How could this be? How could a stone tell them where the sun was when people couldn’t see the sun–and this in the Dark Ages? It must have been sorcery! And, that may have been what they thought… But, think they may have solved the mystery with a clear calcite stone native to Iceland called Iceland spar. I’ve seen these referenced online as sunstone, however the gem sunstone is a feldspar (like moonstone or labradorite), and is not calcite. 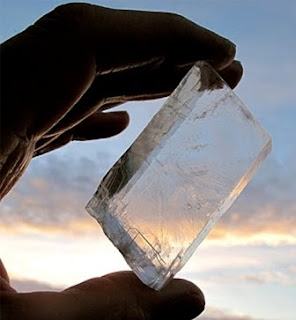 “Iceland spar behaves theoretically and experimentally like a perfect depolarizer.” In other words, with the crystal held up to the sky, there is one specific angle of rotation, called the isotropy point, at which the crystal eliminates all polarization of the light passing through it…if you look through the crystal in its depolarizing position and then pull it away suddenly from your line of sight, you can catch a glimpse of a faint, elongate yellowish pattern known as a Haidinger’s Brush. The key here is that the ends of that yellow shape point directly toward the sun.” 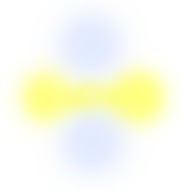 Here is the science of how it works:

“They would have relied upon the sun’s piercing rays reflected through a piece of the calcite. The trick is that light coming from 90 degrees opposite the sun will be polarised so even when the sun is below the horizon it is possible to tell where it is.”

“They used the double refraction of calcite to pinpoint the sun by rotating the crystals until both sides of the double image are of equal intensity.”

Historical Importance:
With the magnetic compass not reaching Europe until the 13th Century, and the astrolabe not until the 15th Century what was a Viking who wanted to explore far and wide to do on a cloudy day, or when land was no longer visible?

Well, many researchers are saying that if the Vikings had this kind of “technology” available, it lends plausibility to the Vikings sailing across the Atlantic to North America, well before Columbus did.

Yes, archaeologists have found distinctly Viking artifacts in Canada and the US, but this new discovery helps us piece together the puzzle left by these people who did not record their history.

Further, it appears they shared their secret with someone else because a sunstone had been found “in the wreck of a ship the Spanish Armada sunk [at Alderney] in 1592. Magnetic compasses had been common in Europe for some 300 years by then, but Ropars and La Floch have reason to think an optical compass…might still have been useful in these later times. ‘We have verified that even only one of the cannons excavated from the ship is able to perturb a magnetic compass orientation by 90 degrees’,” which would render it useless for navigation.