Marsha A. Moore joins us today to wander around the words. Congratulations are in order. Marsha has just completed the final book, Quintessence, in a five book epic fantasy series, the Enchanted Bookstore Legend. She is back again after posting here in November of 2o12 after completing the third book in her series. And now she’s going to tell us a little about how it feels to finish a five book series. So let’s welcome Marsha by seeing what she has to say and leaving some comments.

Barbaric Dark Realm warfare threatens to overtake all Dragonspeir lands, including the Alliance. Lyra McCauley, the fifth Scribe of the Alliance, finds herself in a desperate competition to gather four missing keystones. Those amulets of the four natural elements guarantee victory for the side possessing them. The Dark Realm’s alchemist, Eburscon, beats her to finding the water gem, the Pearl of Pendola. Three more keystones remain: the fluorite containing earth energy, the moonstone of the sky, and the fiery, dangerous Emtori Ruby.

The powerful gems, stolen centuries ago, channel astral energies and can restore much-needed Alliance power—the last hope. The wizard, Cullen, who is Lyra’s beloved, relies on Alliance magic for his immortality and will perish if the land falls to the Dark Realm.

Lyra must use her rare magical energies of quintessence to guide her to the hidden keystones before her opponents, who plan to destroy the Alliance, or to claim the power of quintessence for themselves.

In the above description of the final Enchanted Bookstore Legend my heroine, Lyra, is desperate to master the ultimate power of quintessence. You might wonder—what is Quintessence, and how will it help Lyra?

It’s an alchemical term, referring to the fifth essence or element, ether, the constituent matter of the heavenly bodies. The other four natural elements are air, fire, earth, and water. This fifth element is superior to the others. It is the divine spark hidden in all things, the reflection of the Celestial Fire. Quintessence is formed by the perfect balance of the four natural elements. The harmony of the fifth power is an exalted state.

In the world of Dragonspeir, quintessence is the greatest power that any magical being can possess. As the fifth Scribe, Lyra is capable of earning this power. But she has had to work hard, enduring many hardships and risking her life. Over the course of a series of five books, she’s completed numerous dangerous quests. She’s also made many treasured friends along the way. On all of those adventures, I’ve enjoyed guiding her and her beloved wizard, Cullen, along with his animal assistants, Kenzo the tiger owl and Noba the pseudodragon. Those four rest very close to my heart.

I’ve invested over three years writing this epic tale. During the last year, I’d been eager to realize the culmination of the twisted, interwoven storylines. However, while writing the final book, Quintessence, when I approached the last five or six chapters, I hesitated and had to force myself to go on. That’s not my normal rhythm, usually ending a novel like it’s burning my fingers. And I well knew what the plot required. I just didn’t want to part with my characters and that incredible fantasy land.

With the series now complete, I feel proud of my work. Looking back, it seems a huge accomplishment. But it was an effort of love, without hardship, so completing the path feels like only a small milestone. What I’m more proud of are my characters—the strength, compassion, loyalty, and love they shared. I feel like a happy parent seeing children leave the nest, sad for my characters to leave my daily life, but thrilled they will now share their endearing qualities with new readers.

At times, even though I’m eager to enjoy the storyline while writing a new book, I feel lost as I awkwardly attempt to shape new characters. They seem like strangers I must work to get to know. Frustrated with the slow process, I often ache to write more about Lyra, Cullen, Kenzo, and Noba. Perceptive readers of my legends will be aware that two important child characters, one good and one evil, remain at the end of the fifth legend with futures that could be potentially significant. Some days, I love to daydream about those two children…what paths they might take in the world of Dragonspeir.

Thank you, Cynthia, for inviting me to share my experience with your readers.

All five volumes of the Enchanted Bookstore Legend are available on Amazon.

The Enchanted Bookstore Legends are Epic Fantasy Romance novels about Lyra McCauley, a woman destined to become one of five strong women in her family who possess unique magical abilities and serve as Scribes in Dragonspeir. The Scribes span a long history, dating from 1,200 to present day. Each Scribe is expected to journey through Dragonspeir, both the good and evil factions, then draft a written account. Each book contains magic with vast implications.

Lyra was first introduced to Dragonspeir as a young girl, when she met the high sorcerer, Cullen Drake, through a gift of one of those enchanted books. Using its magic, he escorted her into the parallel world of Dragonspeir. Years later, she lost that volume and forgot the world and Cullen. These legends begin where he finds her again—she is thirty-five, standing in his enchanted bookstore, and Dragonspeir needs her.

When Lyra reopens that enchanted book, she confronts a series of quests where she is expected to save the good Alliance from destruction by the evil Black Dragon. While learning about her role, Lyra and Cullen fall in love. He is 220 years old and kept alive by Dragonspeir magic. Cullen will die if Dragonspeir is taken over by the evil faction. 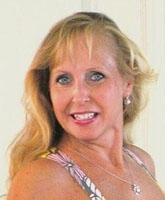 Marsha A. Moore is an author of fantasy romance. Much of her life feeds the creative flow she uses to weave highly imaginative tales.

The magic of art and nature often spark life into her writing, as well as watercolor painting and drawing. After a move from Toledo to Tampa in 2008, she’s happily transformed into a Floridian, in love with the outdoors. Marsha is crazy about cycling. She lives with her husband on a large saltwater lagoon, where taking her kayak out for an hour or more is a real treat. She never has enough days spent at the beach, usually scribbling away at stories with toes wiggling in the sand. Every day at the beach is magical! She’s been a yoga enthusiast for over a decade and recently completed a year-long Kripalu-affiliated yoga teacher training program. The spiritual quest of her yoga studies helps her explore the mystical side of fantasy.

2 thoughts on “In Marsha A. Moore’s Words: Finishing an Epic Tale: the Final Enchanted Bookstore Legend”