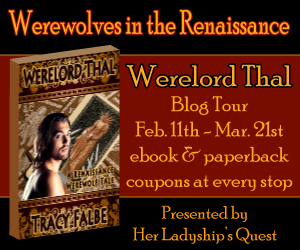 Thal is wanted for Devil worship and shape shifting but still boldly walks the streets of 16th century Prague. Jesuits hunt him. Mercenaries fear him. Musicians sing his praise, and women are captivated by his alpha swagger.

Many think that fantasy stories are all “made up.” Quite contrary to that belief, writing historical stories, as fantasies tend to be, requires a great deal of research. Tracy is here today to share a little of what she learned in researching Werelord Thal.

The Role of the Condottieri Mercenary Captains in the Renaissance

The Renaissance is known for so many lofty things like great art, rediscovery of ancient science, navigation of the oceans, and book printing.

But it was also a time of bitter religious conflicts, gunpowder weaponry, and escalating wars between rising commercial empires. Many men were needed to fight the incessant conflicts, especially since “canon fodder” was a new class of combatants. Armies are terribly expensive for kings to keep handy. So like today, rulers started “outsourcing to private contractors” to save money. Therefore a class of mercenaries became useful when one prince needed to destroy another prince.

In the late Middle Ages, mercenary captains or warlords arose in Italy because the numerous warring states of that sunny peninsula had more money than soldiers. Mercenaries from all over Europe found employ among Italian princes. Their warlord leaders were called condottieri, a word based on the Italian word for contract. They would be contracted to find their own soldiers and fight whoever they were being paid to attack.

Because the condottieri were not natives motivated by love of country, they valued profit and survival more than glory. The increasing employ of condottieri by nobles and kingdoms began to transition the nature of warfare from a so-called “noble” pursuit grounded in chivalrous sentiments to a cutthroat and sneaky one. Blasting apart walls with gunpowder was much better than valiant charges on horseback.

The profit motive of condottieri naturally made them susceptible to changing sides. The highest bidder gets the best warlord with the most soldiers. The condottieri were often quite effective at what they did and amassed fortunes and political power. Men of non-noble birth were even known to succeed in this career and become influential.

As the Renaissance progressed and nation states took shape and grew wealthier, the wars became larger. The demand for mercenary troops increased, and condottieri were crucial to waging campaigns.

In the book Furies: War in Europe, 1450 to 1700 by Lauro Martines, this era of warfare is known for the rise of the entrepreneurial warlord. They would try to keep profits high by finding the cheapest labor they could, often by abducting men or emptying jails to force men into soldiering. Nations did this as well, but often it was performed by the contractors. Cheap soldiers and effective tactics meant for fast fights and more money for the commanders.

In my newest novel Werelord Thal: A Renaissance Werewolf Tale I developed a condottiere character. (Condottiere is the singular form of condottieri.) Condottiere Valentino Sangoro of Milan is hanging about Prague in the story because so much conflict is simmering below the surface. The book is set in 1561 when the Roman Catholic Church and the Holy Roman Empire were gearing up to halt the spread of Protestantism. The character of Valentino was my vehicle for illustrating the contentious atmosphere and the dirty business of Renaissance warfare.

In this little exchange between Valentino and the hero Thal, I display the greedy faithlessness that I imagined for a typical condottiere.

Once they were alone, Thal asked, “Who are these associates Carmelita wanted me to meet?”

Valentino lifted his beer. “Her in-laws are Protestant agitators. She’s involved with a group of nobles plotting to drive out the Church,” he said and took a drink. He wiped his mustache and shook his head at their folly. But it did not matter. A lot of money was going to be on the table sooner or later, and the highest bidder would have the best cause in Valentino’s view.

Born of a witch and a sorcerer, he is summoned when his desperate mother casts the werewolf spell before facing torture and execution. Burdened with her magical call for vengeance Thal seeks the men that killed her. His hunt is complicated when the Magistrate’s stepdaughter Altea Kardas crosses his path. Horrified that her community is burning women to death, she can confide her doubt and fear only to Thal.

Click here for a four chapter preview of Werelord Thal.

Here’s how to get it:

Also available at other retailers (Coupons only work at links specified above.)
Amazon Kindle
Nook
Smashwords
iTunes
Kobo
All Romance 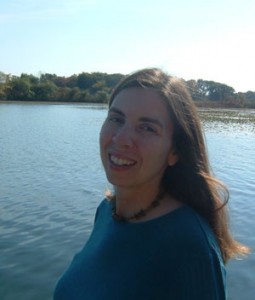 I consider writing a necessary activity that I enjoy. I have the most fun writing in the fantasy genre. I find inspiration in history and like to contemplate warfare before gunpowder and life without modern technology. Placing characters in an elder fantasy world fascinates me and allows me to explore age-old notions of bravery when combat was often done face-to-face. Magic is another story element that adds to the pleasure of writing in this genre.

7 thoughts on “Wandering Around in Tracy Falbe’s Words: Werewolves of the Renaissance”