Lady Rhiannon watches from the turret wall with an ache in her blood. She’s the only person who can decipher the message as the sole keeper of the Dragon Tome. When an old enemy threatens the castle, her father charges his knight with escorting her to a safe haven—the same knight Rhiannon had a crush on as a girl. But she must now convince him to change his plans, for she has her own sacred charge to fulfill…

So begins a journey to hidden ruins where magic slumbers in the stones and love lies in the heart, waiting to awaken. As Rhiannon and the knight face seemingly insurmountable odds, only the dragon knows if they can fulfill their destiny…

Writing and Marketing the Shorter Forms

I love reading short stories. Perhaps because with two small kids, a household to run, and fundraising duties in my children’s school, I can never seem to finish a novel the way I used to. It drags on for weeks and I lose that exciting momentum that pulls you through a longer, complicated plot. So it seemed natural that when I began writing again, after taking a long break due to my teaching career and motherhood, I would craft in the shorter form. The Dragon’s Message is a novelette, one of three that I have planned in the Dragon Tome world.

I think writing in one of these shorter forms is perfect for the writer who is coming to the desk as a second career. After all, I can’t refuse to cook dinner because I have a writing deadline (imagine the family mutiny!), but I can outline a character sketch or even type a paragraph or two if inspiration hits while dinner is in the oven and the kids are watching their after-homework TV shows. It gives me a great sense of accomplishment that I am fulfilling my passion and enriching my mind and soul by finding the time, here and there, to write. Of course, The Dragon’s Message did take me approximately four months to finish. But it was worth it, and I’m in no rush. I’ve gotten better at finding blocks of time to write, and have two more stories finished  (and waiting patiently for their turns), and one in the works.

There is a great market for shorter literature on social media. Many people will scroll through Twitter or Facebook on their commutes, lunch breaks, or waiting for appointments. I’ve found it a blessing to schedule posts and tweets especially during these key times of the day. And many of these readers are like me, looking for a great fantasy story in their little personal spaces of the day to spark their imaginations.

An excerpt from The Dragon’s Message, a Dragon Tome Novelette

When Rhiannon was small and had just learned to read, her mother brought her into the hall one day when her father was on campaign, and led her to the large table upon which a great map of their lands lay. She instructed Rhiannon to read the words of the landmarks: castle, road, mountain, forest, village. The young girl touched words inscribed over a place where trees met craggy peaks. “What does that say, my love?” her mother prompted.

“Here be dragons,” Rhiannon answered, glancing up at her mother.

Her mother nodded, smiling. She knelt down in front of Rhiannon so they were at the same height. The lady’s hazel eyes sparkled as she whispered, “I have a secret to share. But I can only share it with a little girl with red and gold hair,” she pulled playfully on Rhiannon’s braid,” who knows how to read.” Rhiannon giggled. “Are you a little girl such as this?” Rhiannon nodded eagerly, and her mother laughed. She stood up and gestured at a tapestry on the wall. “Come, child, the dragon guards our treasure.”

Hand in hand they walked to the tapestry of the sleeping dragon. “Your great-great grandmother wove this tapestry when she was an old woman. It took her a long time to complete, with her hands gnarled so, like the twisted oak by the drawbridge.” The dragon was curled up in front of a turret, with stone dolmens in a semi-circle behind it, interspersed with trees and a mountain peak in the background and bright blue sky above. The dragon’s scales were crimson and woven through with glittering gold thread, and its curved horns and talons were gold. As they paused in front of the large tapestry, Rhiannon looked closely at the eyes of the dragon; she thought perhaps she could see a slit of gold, as if the dragon were only pretending to be asleep.

Rhiannon’s mother stood on tiptoe and moved part of the tapestry to the side, revealing a slit in the stone wall. With her free hand she reached in and drew out a large leather-bound tome. She motioned her daughter to come sit with her on one of the benches that lined the walls. “Look and listen well, my daughter,” she said, and ran her fingers along the smooth cover, “this book is our special treasure, and it contains many secrets within its pages. I am going to teach you how to read them.” She opened the book as Rhiannon snuggled closer to her, her mother’s loose red-gold hair falling over the girl’s shoulder and brushing the crinkly parchment pages of the book which she turned until she came to the picture of a girl.

“The first secret is a story…” 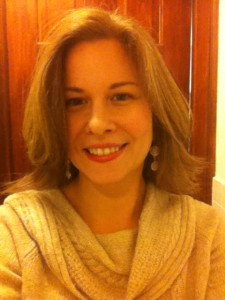 Lori J. Fitzgerald lives in New York with her fellow English Major husband and their two little bookworms. Medieval literature is her passion, and she wishes she could spend more time traipsing around Renaissance Faires and shouting “Huzzah” at jousts. She was a middle school English teacher for many years and was best known for her dramatic readings of The Princess Bride. Lori is currently a Staff Writer for the website Once Upon A Fan, the popular fansite for ABC’s hit show Once Upon A Time. You can contact her by email at WhiteRaven829@gmail.com or on Facebook or Twitter.

4 thoughts on “In Lori J. Fitzgerald’s Words: Writing and Marketing the Shorter Forms of Fantasy Literature”