Disciple is a gritty fantasy romance series in six parts. The Disciple Half-Omnibus collects the first three parts into one meaty ebook. Part IV will be on sale March 1st! 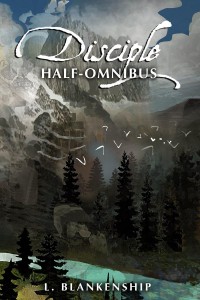 War is coming. Kate Carpenter is only a peasant girl, but she’s determined to help defend the kingdom and its bound saints against the invading empire. Her healing magic earned her a coveted apprenticeship with the master healer; now she must prove herself ready to stand in the front lines and save lives.

She’s not ready for the attentions of a ne’er-do-well knight and the kingdom’s only prince, though. This is no time to be distracted by romance — the empire’s monstrous army will tear through anyone standing between them and the kingdom’s magical founts. All disciples must put aside their tangled feelings and stand in the homeland’s defense.

Interview with a prince:

Prince Kiefan is the only surviving son and heir of the king of Wodenberg. Like his father, he has a reputation for discipline and stern expectations–and he’s eager to prove himself now that he’s come of age. I had some questions for Prince Kiefan at the beginning of Disciple, Part I. He’s about to leave on a vital secret mission to find allies for the kingdom.

L: You’re an alpha male in training and this secret mission is your most important command yet. Do you feel ready for this?

Kiefan: I trust the saints’ judgement. Though Father and I disagreed over the cavalry charge that I led some months ago, he cannot deny that it won the battle. The saints have judged me fit to lead and I will not fail in my duty to them or my people.

L: You didn’t expect the master healer to send his apprentice, though.

Kiefan (frowning): No, I was told he would be with us in this, and then he brought Kate in his stead — but the saints affirmed her, gave her charge of our well-being. One must work with what’s given.

Kiefan (he laughs): I squired with Captain Aleksandra. Any who dares doubt her will be put straight on the matter of a woman’s strength and courage. But Kate’s no disciple of the sword. She’s a healer. It’s clear enough this will be no easy journey across the mountains — none have made it and returned, that any know of. The saints ask much of us, as it is.

L: So the problem is more that she’s — bookish?

Kiefan: Kate has never even been in the saddle before today. Surely she’ll learn it, but yes, she’s spent more time among books than —

L: I hear you’re fond of books yourself.

L: No, I mean those philosophy essays you’ve been sneaking peeks at.

L: There’s nothing wrong with a little philosophy, surely?

Kiefan: The king of Wodenberg must be a knight, firstly. He must see to duty. We’re at war.

L: Yes, it’s always duty for you. Including a political marriage someday.

Kiefan (gets up from his seat, impatient): The privileges of the throne have their price. I’ve a mission to lead. (strides away, armor clinking)

L: You’re not concerned about traveling with a cute, philosophy-reading healer?

L: Oh, yes. She’s been reading those essays too. Her teacher might’ve sent some homework with her on the mission.

Kiefan (doesn’t know what homework is, but he gets the gist): Why should that be troublesome?

Kiefan: Which books is Kate bringing? 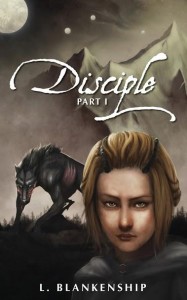 Read Disciple I for FREE from
Amazon •Smashwords •AllRomance

Check out this Rafflecopter giveaway to win one of two free copies of the Disciple Omnibus. 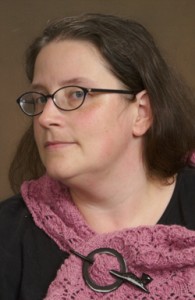 L. Blankenship started writing animal stories as a kid and it’s just gotten completely out of hand since then. Now she’s out publishing her gritty fantasy and hard science fiction adventures. L grew up in New Hampshire but currently lives near Washington, DC. She blogs here.