Unearthed 2009 Weymouth:
54 skeletons
51 skulls
all male and in their late teens to about 25
1 individual with intentional dental modification 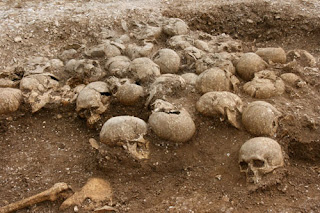 Historical Importance:
This 10th or 11th century find in Weymouth has indicated that Vikings participated in tooth filing like other Scandinavian cultures. “Teeth with neat parallel grooves have been found in Viking graves in Sweden, Denmark and England, and farther afield”

The purpose behind such an uncomfortable practice is still being sorted out by
experts. However, some pose that it was to frighten, or intimidate opponents. 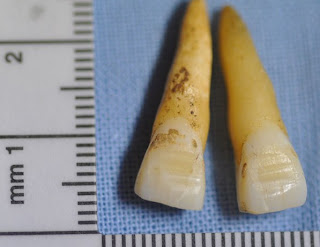 I like this idea in an amusing sort of way:
To show their furrows, the individuals would have had to smile quite broadly and to be visible from any distance they would need to be ‘coloured’. However, this would have disappeared when they ate and drank, so they would have had to reapply regularly. Their “dental bling” would have needed to be applied after meals, like lipstick, and really, how intimidating is the look of rotten teeth? 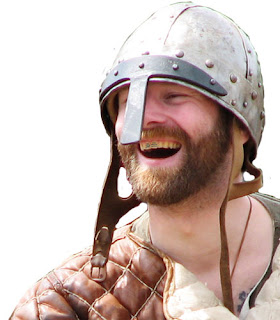 One thought on “A Viking Mystery”