Unearthed: Treasure Horde
What treasure hunter hasn’t dreamed of stumbling across the find of a lifetime? Maybe a source of not only his, but local pride? What Darren Webster found in Lancashire was not only those things, but also was once the very dear belongings of a Viking leader from around 900 AD. 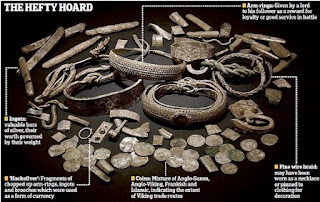 Historical Importance:
“Big hoards such as this paint a new picture of what Vikings were doing in England,” says anthropologist Stephen Oppenheimer from Oxford University, “Burying large amounts like this indicates they were settling here.”

One coin, of a type never seen before, could prove that Vikings were not all just heathen, bloodthirsty invaders raping and pillaging their way across the countryside. They were, in fact, looking for a place more hospitable to settle than the frozen wastes of the North.

On one side, this coin may carry the name of Viking ruler in Northern England, one that no one has heard of before. The name Airdeconut may be a representation of the Scandinavian name Harthacnut.

On the other, it features the words DNS, abbreviation of “Dominus” and REX arranged to form a cross. This is a reminder that many Norse converted to Christianity when in England.